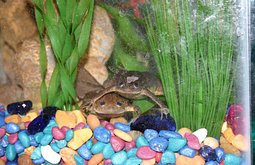 On this page you can read about the adventures of our frogs, Frick and Frack! (And don't forget to sign their guestbook at the bottom of the page before you leave!)

If you want to see lots and lots of photos of Frick and Frack (and at some point maybe even some video!) Check out our photo galleries :

Click above link to see most recent photos of our frogs.

5-15-05....so its been awhile since I have updated on our frogs or posted some new pics so I am here to do that now! Let me start by saying that as of right now (5-15-05) both of our frogs are happy, doing well INSIDE their nice clean tank! And so the story begins....

Our Frogs...
Now where to begin with this story...Let's see....ben and I decided that we needed to clean their tank and and change the filter in it b/c the water had started to get murky and the filter was clogged b/c I had opened the wrong side of the food thing a couple of times and poured a BIT much food into the tank.

now don't get me wrong...our frogs CAN EAT-but it started to mess with the tank and so it was time to clean. Now I should clearly state here that ever since the escape attempt made by one of the frogs I tend to have HIGH anxiety whenever we have to change the filter or anything where they could potentially get out. We started by purchasing a smaller "critter keeper" to put them in temporarily and a new net to scoop them out of the tank with. We had to get a larger one b/c they are HUGE now but we should have stuck with a smaller one that our hands fit over!

And so the story begins......on the way home from work ben picked up 30 gallons of water for their tank (its a 30 gallon tank and we don't use ALL of it b/c of all the stuff we put in the tank but I won't use tap water for them and I would rather have extra!)

So, after I get home with the "critter keeper" and the net and ben has the water we decide to begin. Now I am not sure how much you all really know or recall about my living room but our frog tank is on top of our entertainment center that holds our tv, tivo,cd player,etc. Well...apparently our special little frog didn't REALLY want to go into the small little tank without a little sightseeing along the way....

As ben catches Frack (frog #1) in the net, and begins to move him into the smaller safe keeping tank, the frog JUMPS OUT OF NET and onto the top of the entertainment center and decides that the view there isn't all that interesting and so he decides to JUMP BEHIND THE ENTERTAINMENT CENTER!!!!

Now I should interject here that this entertainment center is massive and HEAVY-and there is a heavy bookcase next to it too that if we ever need to get behind it we have to move both and since its so heavy we usually just don't bother unless we HAVE to.

Well....I start to hyperventilate as I realize my frog is now BEHIND the entertainment center and I can not come up with any way in my head that we will be able to safely and successfully get the frog...meanwhile ben becomes He-Man and miraculously moves the book shelf AND the entertainment center in record time and then asks me for a flashlight. All I can find is my blue pen-light I use to look at the back of computers and so I give that to him and he shines at the frog and Frack gives him this look like "here I am...try and catch me!" and then jumps forward toward ben (thankfully!) but goes through ben's legs, under the bookshelf and out the other side. I start flipping and drop to the ground to try and trap him and then the frog jumps into bens work pants that are crumpled on the floor (thankfully!) and I am able to trap him there. I finally scoop him up and put him in the critter keeper. And then I proceed to scold that #%!$%#$^!!%$%$#$%#^%&%&* frog for jumping and giving me a heart attack!!

Thinking we learned from trying to get the first one out, you would think we would have some how found a more effective way of getting the frog from the tank to the critter keeper. Not so much.

We attempt to scoop up the second frog the same way only this time we did open the entire lid of the temporarily tank instead of just the little "sunroof" but this frog, FRICK, who has not explored the house before and only heard stories from FRACK's adventures a few years ago, decides that she too will not go right into temporary tank, this little #%#%^$%^ frog wants to take the scenic route also.

So as we are about to drop the frog into the temp tank, it takes a great leap OFF the entertainment center and lands on my shoes that were on the floor (somehow not breaking any legs!) and then heads to the kitchen. I immediately drop to my knees to try and catch him as he gets closer to going behind the speaker we use as a table right by the kitchen entrance but this frog decides it looks more inviting in the kitchen. At this moment I have visions of the frog going under the refrigerator and us NEVER getting him out (I had read stories of frogs escaping and living in the drip tray under fridges b/c they can survive as long as they stay wet). But as he gets closer to the fridge I think he notices the big black hole of a back room we have where we would NEVER EVER have been able to locate him. As he leaps toward the room I dive (as ben likes to say, "volleyball players across the world would be jealous of the dive you took") in order to catch and trap the frog successfully without crushing him. As I now have this quick slimy sucker under the cups of my hands I tell ben to bring over the temp tank so I can just drop him in b/c I wasn't taking any chances of him getting out of my grips by walking across the room with him!

Once both frogs were in their temp tank, I locked the lid and then put a mug onto of it for weight just in case they got any ideas. I then spent the next few hours while ben actually did the work of cleaning all their stuff and rocks and the tank, starting at them and scolding them for freaking me out. I don't think I was able to breathe normally again until they were IN their regular tank and it was taped shut like normal. I kept watching them to make sure all their limbs were moving and they were ok. They weren't covered in as much dust as the one that got before was but they still picked up some dust and stuff along the way.

I took some photos of them in the temp tank (you can see the dust stuff in the water as it came of them. I picked out the big pieces before putting them back in the tank b/c we weren't taking ANY chances of them jumping again as I tried to drop them in...I just submerged the entire temp tank in their tank and let them figure out how to get out before taking it out of their tank.

And so now they live happily BACK IN THEIR TANK!

***June 8 2002*** We have a CRAZY frog!!! One of the frogs, Frack, got out of the tank and was about a foot in front of the couch when I stepped on her and noticed she was out! I felt something soft an squishy and looked over and there was our frog!!!! I quickly put her in a bowl with water and she was still moving, just not a lot. I put some food in and she seemed to eat it. She is not moving a lot but moving a little so I know she is still alive. We can't figure out how she got out of the tank because I Have this heavy crystal dolphin on top of the lid to prevent this type of thing and it never moved! We think she slipped out through a VERY small gap by the filter that we have since duck taped closed! We put her back in the big tank and now are just hoping that after a day or so of rest she will be back to her old self. Keep your fingers crossed for us. I will update when I know more.

Monday June 9, 2003- Frack seems to be doing fine. We will be keeping an eye on her for a few more days to be sure but things look good. She has moved from resting at the top of the tank to hiding in the grass. She has also been seen moving around a lot faster like she normally is. Keep hoping!

Tuesday June 10, 2003 - Today when I left for work, both Frick and Frack were still in their tank and they both looked pretty good so I think we are in the clear. I am not ready to say 100% just yet but things are looking good.

Wednesday June 11, 2003 - It looks as though things have settled in the tank of Frick and Frack. No more escape attempts have been made and I am happy to report that as of now, they both seem healthy. I would like to say though that I have come to the conclusion that we have the vainest frogs around. There tank is in front of a wall size mirror. Often times they are seen in the back of the tank where they face the mirror (and to be fair most of the grass/trees they like to hide in are back there), however they are always looking in the direction of the mirror. There are plenty of other directions they could look but they choose to face the mirror. Just a thought.

Sunday June 15, 2003 - All is well in the tank of Frick and Frack. We have completely cleaned and changed the water in the tank, secured the filter (and duck taped closed any holes they might try to "jump" out of). We also added a few new plastic flowers and grass that they seem to LOVE. They appear healthy and happy. Below are some pics of them in their home!